The new Constitution recognized that the debts of the previous government under the Articles of Confederation were still valid. If a state law is in conflict with federal law, federal law must prevail.

Realizing that over time the nation would want to make changes to the Constitution, its framers established a process to allow that to happen. Unlike laws and regulations that can be passed by simple majorities in Congress, the Constitution is more difficult to change.

The founders of the United States believed a free press was a prerequisite for a free society. James Madison, often called the Father of the Constitution, said it was “one of the great bulwarks of liberty.”

Free speech is our most fundamental—and our most contested—right. It is an essential freedom because it is how we protect all of our other rights and liberties. If we could not speak openly about the policies and actions of government, then we would have no effective way to participate in the democratic process.

Each state must respect and honor the state laws and court orders of the other states, even when its own laws are different. For example, if citizens of New Jersey marry, divorce, or adopt children in that state, Florida must recognize those actions as valid.

The American Revolution was a radical experiment in liberty. Nowhere was its character more evident than in what Thomas Jefferson called a “novel innovation”—the First Amendment’s separation of church and state. The language was unmistakably direct: “Congress shall make no law respecting an establishment of religion.”

For the American revolutionaries, freedom of the soul was the most precious liberty. It was first among rights because it gave meaning to freedom itself. Without it, truth would perish; without truth, men and women could never be fully free.

“All men are created equal.” This phrase has stirred hearts around the world for more than 200 years. It is one of the values most associated with the United States, but nowhere is the language of equality among individuals found in the Constitution.

Efforts to define freedom began with the European settlement of North America, but the struggle was most fierce during the Civil War and its aftermath of Reconstruction. Until then, Americans usually defined freedom in relationship to the African slavery they knew—slaves were not free, and free men were not slaves.

Rights are expressions of individual liberty. The history of America is, on the whole, a story of individual liberty and rights. In 1776, the signers of the Declaration of Independence boldly proclaimed their belief in the right of equality—“all men are created equal”—and in the inalienable rights of life, liberty, and the pursuit of happiness.

On August 23, 1984, the New York Times carried a brief story on its inside pages about a disorderly march in Dallas, Texas, the host city for the Republican National Convention. The incident had begun as a protest against the renomination of President Ronald Reagan for a second term.

The preamble expresses the purpose of the U.S. Constitution. The federal government gains its power from the people rather than from the states. The government exists to maintain peace at home, provide national defense, promote the well-being of the people, and protect their liberties.

Liberals and conservatives alike have decried “judicial activism,” whenever rulings went against them. Despite these complaints, the Supreme Court has reserved the final word on whether the actions of the executive and legislative branches comply with the Constitution.

Since the Bill of Rights—the first ten amendments to the Constitution—was adopted in 1791, Congress has passed an additional twenty-three amendments, of which the states have ratified only seventeen. Such statistics indicate the magnitude of difficulty in amending the U.S. Constitution.

This book analyzes 30 Supreme Court cases chosen by a group of Supreme Court justices and leading civics educators as the most important for American citizens to understand. 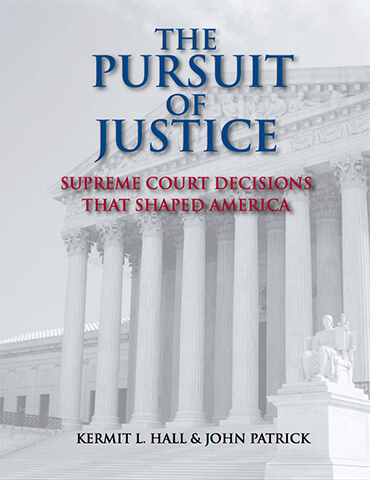 The EPA was formed in 1970 by President Nixon and Congress as an independent government agency to coordinate and oversee the preservation and protection of the environment. Previously, various environmental programs had been handled by different departments.

The Environmental Defense Fund is a nonprofit advocacy group “dedicated to protecting the environmental rights of all people.” It works on issues such as air and water pollution and climate change.

The Center for Public Integrity is a nonprofit, nonpartisan organization that publishes investigative journalism projects on issues of public concern. The center’s mission, according to its website, is to “make institutional power more transparent and accountable.”

Part of the U.S Department of Education’s Institute of Education Sciences, the National Center for Education Statistics publishes and analyzes a wide variety of data pertaining to public school education and finances.

People for the American Way says it favors “pluralism, individuality, freedom of thought, expression and religion, a sense of community, and tolerance and compassion for others.” PFAW was founded in 1981 by Norman Lear, Barbara Jordan, the Rev. Theodore Hesburgh, and Andrew Heiskell, in part as a response to the political efforts of religious figures Jerry Falwell and Pat Robertson.

In 1971, Supreme Court Chief Justice Warren Burger advocated the creation of a “central source for the state courts,” which led to the birth of the National Center for State Courts. The NCSC prides itself on “improving the administration through leadership and service to the state courts and serving as an information clearinghouse so that innovations in one court can benefit all courts.” The NCSC does this by conducting research, publishing reports and hosting educational programs about court operations.