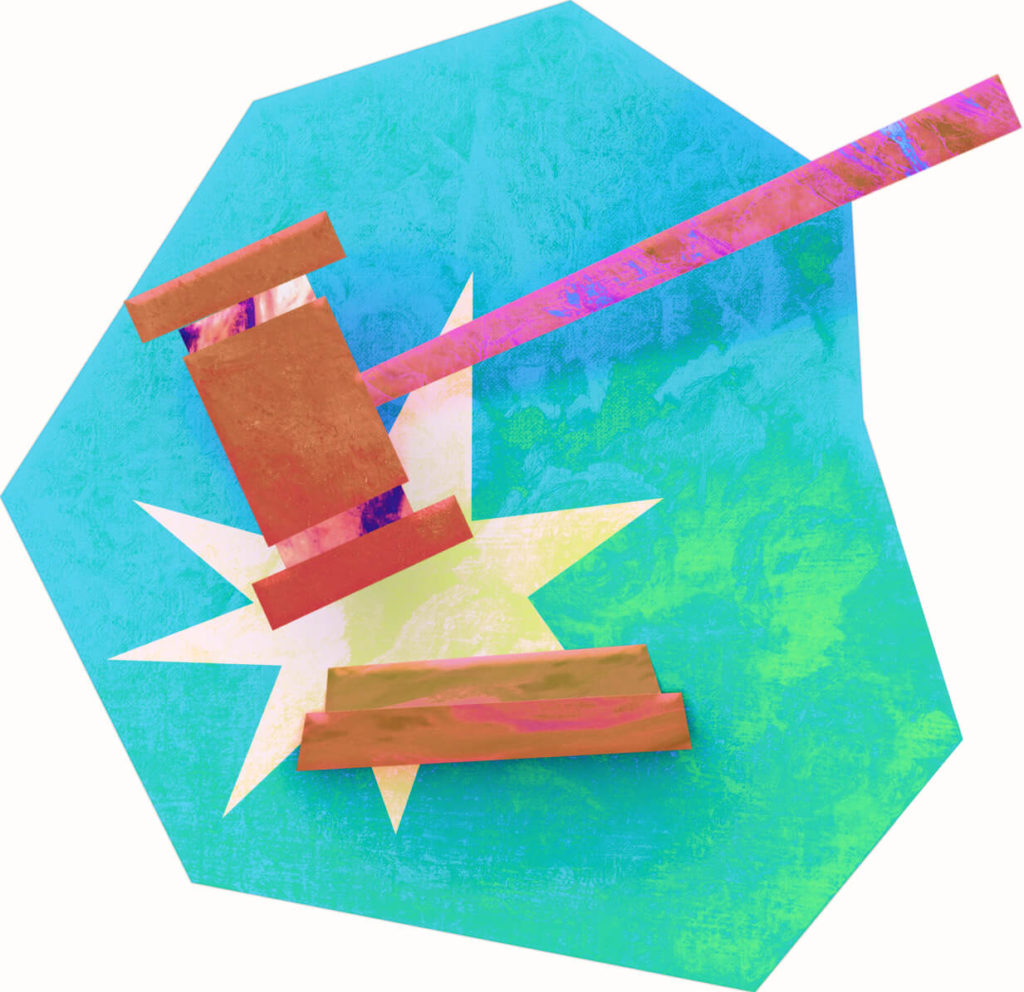 In all criminal prosecutions, the accused shall enjoy the right to a speedy and public trial, by an impartial jury of the State and district wherein the crime shall have been committed; which district shall have been previously ascertained by law, and to be informed of the nature and cause of the accusation; to be confronted with the witnesses against him; to have compulsory process for obtaining witnesses in his favor, and to have the assistance of counsel for his defence.

Right to a Jury Trial: In a criminal case, the government prosecutes or charges a defendant with a violation of the criminal law and begins proceedings (bail hearings, arraignments and trials) to prove that charge beyond a reasonable doubt.

The Sixth Amendment provides many protections and rights to a person accused of a crime. One right is to have his or her case heard by an impartial jury— independent people from the surrounding community who are willing to decide the case based only on the evidence. In some cases where there has been a significant amount of news coverage, the Supreme Court has ruled that jury members may be picked from another location in order to ensure that the jurors are impartial.

When choosing a jury, both prosecutors and defense attorneys may object to certain people being included. Some of these objections, called challenges, are for cause (the potential juror has said or done something that shows he or she may not act fairly). Others are peremptory (no real reason need be given, but one side does not want to have that person serve). Lawyers cannot use peremptory challenges to keep people off a jury because of race or gender.

Right to a Speedy Trial: This right is considered one of the most important in the Constitution. Without it, criminal defendants could be held indefinitely under a cloud of unproven criminal accusations. The right to a speedy trial also is crucial to assuring that a criminal defendant receives a fair trial. If too much time elapses between the alleged crime and the trial, witnesses may die or leave the area, their memories may fade, and physical evidence may be lost.

The Public Trial Guarantee: Like the right to a speedy trial, the right to a public trial serves the interests of both criminal defendants and the public. Defendants are protected from secret proceedings that might encourage abuse of the justice system, and the public is kept informed about how the criminal justice system works. Like most constitutional protections, however, the right to a public trial is not absolute. A criminal defendant may voluntarily give up (waive) his or her right to a public proceeding or the judge may limit public access in certain circumstances. For example, a judge might order a closed hearing to prevent intimidation of a witness or to keep order in the courtroom.

Right to Be Informed of Criminal Charges: The Sixth Amendment right to “be informed of the nature and cause of the accusation” is another protection meant to ensure that the accused receives a fair trail. A speedy, public trial that is heard by an impartial jury is meaningless if a defendant is left in the dark about exactly the crime with which he or she is charged.

Right to Be Confronted by Adverse Witnesses: The so-called confrontation clause prevents prosecutors from relying on witnesses’ out-of-court statements to make their case. Rather, it requires that prosecutors put their witnesses on the stand, under oath. As the U.S. Supreme Court explained in its 1970 opinion, California v. Green, the defendant’s ability to confront a hostile witness in person puts pressure on the witness to tell the truth, allows the defendant’s counsel to cross-examine the witness (which may reveal him or her to be unreliable), and gives the jury an up-close view of the witness, so that they can decide for themselves if the witness is believable.

There are exceptions to the confrontation clause, of course. If a knowledgeable witness is unavailable at the time of trial, for example, a previous statement will be allowed into evidence, so long as the witness made it under conditions that were similar to those at trial (for example, if the statement was made under oath). Defendants also may be prevented from confronting witnesses against them when the well-being of the witness is at issue. For example, child witnesses may be allowed to testify in the judge’s chambers rather than in open court.

However, if an attorney’s performance is not up to reasonable standards for the profession or if the attorney’s ability to put on a full defense is hindered by the prosecutor’s misconduct, then the defendant may be able to challenge his or her conviction. This provision does not guarantee the right to an attorney in most civil cases.